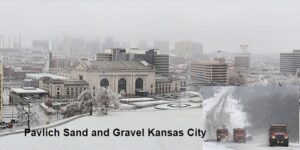 Every sand and gravel delivery in Kansas City gives us a new opportunity to learn more about our customer’s needs and deliver products in a timely cost-effective manner. Our highly trained and experienced team of CDL drivers make every effort to impress each customer with promptness and professionalism, especially now that snows have fallen in Kansas City.

With ice and snow-covered roadways, all the regular rules of safe travel are off, as all streets, highways, parking lots, and sidewalks have been overtaken by winter.  This year, winter is like a war between man and nature, and the city’s roadways are the battlegrounds.  The defense of the city has come down to two things: the use of sand and gravel to provide traction for safe-travel, and the CDL drivers who are enlisting to haul it out to the front-lines.

We are now right in the heart of winter in Kansas City, with indications that the snow and cold temperatures are going to persist much later into spring than anyone expected. By last year’s indication, this winter is far from over.

Fortunately, residents of Kansas City have the means to overcome the obstacles of snow and ice with salt, sand and gravel, and CDL drivers to haul it provided by Pavich Inc.  We produce specialized abrasive mixes of sand and gravel that enhances the traction of highways, driveways, parking lots, and sidewalks.  The right mix of sand and gravel needs to improve traction, stick to the road, and not be at risk of cracking vehicles’ windshields or leaving dents.  The sand and gravel that Pavich produces and distributes are available in almost any size, for any application. 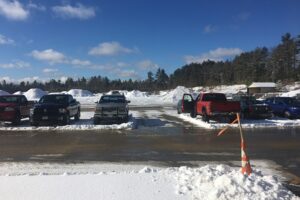 Leading the fight against the elements is Pavlich Inc, producers and bulk-sellers of highly-developed, traction-enhancing, specialized abrasive mixes of sand and gravel, and they are now recruiting an army of qualified CDL drivers to combat this threat to the city; hauling out sand and gravel to where it is needed most – to homes and businesses throughout the metro. If you’re interested in becoming part of a team of professionals, get in touch today!

Posted in Sand and Gravel